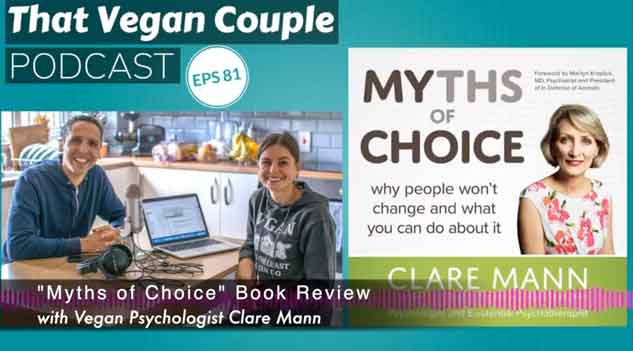 What That Vegan Couple Wish They’d Learnt 12 Years Ago

What That Vegan Couple Wish They’d Learnt 12 Years Ago

Do you need to say NO more often? Would you like to make different choices and live more authentically? What’s holding you back? The answers to these questions won’t only help you live more authentically but help you understand why people resist veganism. In this podcast, Clare Mann and That Vegan Couple discuss 8 myths that hold people back from making choices and the changes that could help improve their lives.

Here’s a short sample of the podcast:

You can listen to the full podcast episode, and all their other episodes, by joining That Vegan Couple on Patreon for just $1/month ???? patreon.com/thatvegancouple

From Vystopia to Powerful Action for Creating a Vegan World

From Vystopia to Powerful Action for Creating a Vegan World

Animal Rights Activism in Australia achieved international media coverage following the 2019 actions celebrating the one-year anniversary of Dominion. Despite changes to laws seeking to silence whistle-blowers of the animal exploitation industries, animal rights activism is growing in Australia. In this conversation with Marlene Narrow of Vegan Rising/Vegan Nation Radio in Massachusetts USA, Clare Mann shares the psychology of resistance and what vegans can do to accelerate animal liberation.

Listen to this interview:

Globally, 2019 was called The Year of the Vegan with Time Magazine saying this on one of front cover of one of its issues. Record numbers of people attended the Australian festivals with the annual World Vegan Day in Melbourne seeing nearly 25,000 attendees.

Despite the increasing awareness of the moral, health and environmental imperatives of veganism, some people still resist changing. What causes such resistance and how can you break them out of the trance?

CLICK to watch a 20 min talk on Why People Won’t Change and What You Can Do About It recorded at World Vegan Day and given at numerous festivals in Australia in 2019.